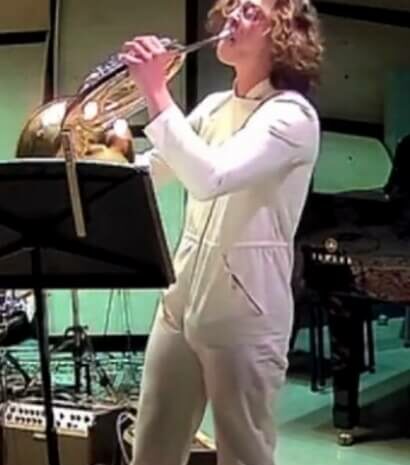 KLANG, the 24-part suite of instrumental and electroacoustic works composed for every hour of the day, came to be prolific yet controversial composer Karlheinz Stockhausen’s final major project from 2004 until his death in 2007. Left unfinished with only 21 completed pieces, the seventeenth hour Nebadon is a rarely-performed composition for French horn and electronic music. The piece features massive logistical challenges for the performer, who receives explicit and non-negotiable performance instructions that include performing the nearly 20-minute work memorized, with eyes closed, staged wearing a costume colored in HKS 10 (a rich orange). Each of the work’s 24 sections is announced by an English or German word or phrase written into the score, which in the last seven lines begin to form a connected narrative :

Amplified and projected across multiple loudspeaker groups, the solo horn part is notated flexibly, giving the performer considerable freedom in forming notes, gestures, and figures. The world premiere of Nebadon was given May 8 2010 by Christine Chapman, horn; and Hannah Weirich, sound direction, at Christuskirche in Cologne, Germany.